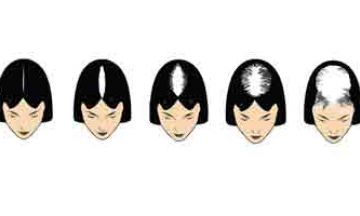 Are you experiencing any of the following?

If you have ticked 3 or more of the following, you may most likely have female patterned baldness. Consult your trichologist to confirm the diagnosis.

Female patterned baldness is one of the most common forms of hair loss after male patterned baldness. It is also known as AGA (Androgenetic Alopecia). Like males it does not quite progress to a state of complete baldness.  However, any which way you look at it, hair loss in women has much impact on a woman’s psyche. It is often distressing and is accompanied by low self-esteem, a forlorn sense of being less attractive along with a lot of anxiety, in social circles.

The inference is obvious- Hair plays a vital role in a woman’s life. A head full of lustrous locks for a woman exemplifies beauty, feminine grace and poise.

There is a distinctive relationship, in women, between their mother, sisters, aunts and grandmothers – when it comes to hair thinning patterns. The problem tends to run in families and is passed on from one generation to the other.  Unlike men, genetic hairloss in women affects the back of the head and also the sides. Hence they do not go bald like men, but lose hair diffusely all over the scalp. This happens because DHT (dihydrotestosterone) – sensitive hair follicles in women are spread diffusely all over the scalp.  Females have oestrogen which is a hair-protective hormone in females. When this hormone falls below normal levels and ups the level of male hormone, testosterone in the body which results in hair loss in women. Female patterned baldness (FPB), like male patterned baldness, is triggered by hormonal imbalance in the body. Conditions, such as ovarian cysts (or, PCOS), or menopause are exclusive triggers for female patterned baldness.

Women affected by hair loss may show hair thinning on the scalp when hair is parted in the midline. The exposed area resembles a ‘Christmas Tree.’ A small percentage of women with hair loss may also show male patterned baldness.

Homoeopathy is a holistic medicine and treats the patient as well as the pathology.  Hence thyroid, PCOS can be simultaneously treated in Homoeopathy without having 10 different medicines unlike conventional medicines.

Stress in females which are the major cause hairloss can be very effectively treated with homoeopathy.

Homoeopathy treats not only all physical complaints, but also targets the mind and gently restores mind-body equilibrium - thus it treats the patient as a whole.

Homoeopathy has remedies such as Thuja Occidentalis and Sabal Serrulata which have been very effective in treating hair loss. These two homeopathic medicines are cited with natural DHT- inhibitor action i.e. they control hairloss caused by DHT without side-effects.

You need not struggle with PCOS anymore. Consult a homeopath!
Posted By: Dr Batra's™, 5 months 1 week ago

PCOS and Infertility: How are these related?
Posted By: Dr Batra's™, 5 months 1 week ago

What increases your risk for developing vitiligo?
Posted By: Dr Batra's™, 5 months 1 week ago