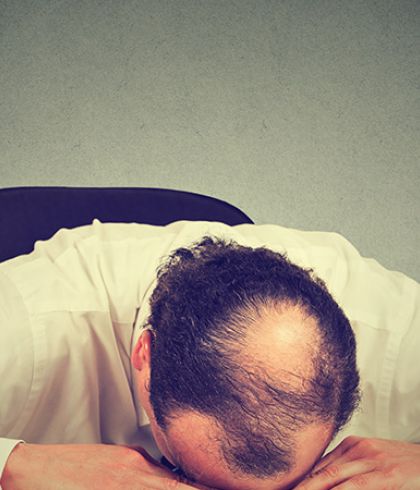 Vipul, a business executive, came to our clinic with a hair loss problem. He said he'd lost almost 40% of his scalp hair in a span of 3 years. His scalp showed balding areas on the crown. He said there was a strong family history on the parental side. His close relatives, specially his maternal uncle, had a clear predisposition for baldness before he had turned 35. Vipul said there was no room for leisure because of his high-pressure, stressful job. He had spent little quality time with his family. He also reported that he often took refuge in smoking and alcohol to overcome his stress. Worse still, his receding hairline was giving him an inferiority complex. He feared that this could affect his performance at work and also his annual appraisal. Vipul's symptoms were typical of Male Pattern Baldness (MPB) also known as Androgenetic Alopecia (AGA). We prescribed him an appropriate homeopathic treatment and asked him to reduce, rather give up smoking and alcohol over time. After one year of treatment, we saw a healthy change in his hair loss - now under 'normal' limits.