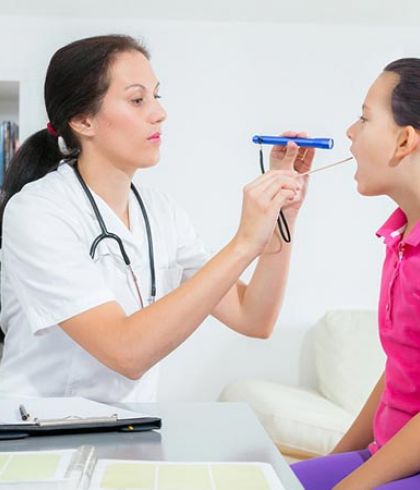 How to identify if my child is suffering from Tonsillitis

How to identify if my child is suffering from Tonsillitis?

Does your child complain of pain in the throat, difficulty in swallowing and fever? If yes, then your child may be probably is suffering from tonsillitis. These are the most commonly found tonsil symptoms when affected.

Tonsillitis is the inflammation of the tonsils which are the protective glands of our respiratory system. They form one of the first lines of defence in the body’s immune system. They are prone to infection, especially during childhood. When our immunity levels drop, the tonsils fall prey to infective organisms.

There are three types of tonsillitis:

Symptoms are a sore or painful throat, fever, and general malaise. The tonsils may appear bright red at first; they may later be covered with a slimy, whitish coating. The glands in the neck may subsequently get enlarged. The symptoms of tonsillitis vary from case to case and they may be gradual or the onset may be sudden.

Most people feel a soreness of throat, difficulty or pain on swallowing, fever with or without chills, headache, malaise, and earache. A runny nose, cough, and hoarseness may also be seen in certain cases.

Diagnosis of tonsillitis is based on medical history and findings on examination, such as enlarged or swollen tonsils and pus pockets on the tonsils.

Exercise and immunity: What’s the connection?
Posted By: , 5 months ago

Boost your immunity with homeopathy
Posted By: , 5 months ago

Signs you have weakened immunity system
Posted By: , 5 months 3 weeks ago

Consult our Health Experts and get 50% off on consultation