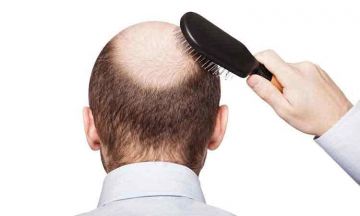 How to Cure Male Pattern Baldness

Male pattern baldness is characterized by a typical pattern of receding hairline at the temples and hair thinning at the crown. Homeopathy can very efficiently deal with such type of hair loss, and give excellent results.

Male pattern baldness (MPB), or androgenetic alopecia (AGA), is one of the principal forms of hair loss (alopecia). It presents with not just depleting, or depleted, crowning glory on your scalp, but it can also trigger major emotional and psychosocial problems, especially in young men.

The disorder, as the name androgenetic alopecia suggests, has genetic ‘roots’ in 80 per cent of individuals. The mode of transmission is, of course, not just one, but from multiple genes (multigenetic).

The ‘disorder’ develops, gradually over 15–30 years. However, there is often a decline in hair thickness, or density, for several years preceding its advent, or actual manifestation. This is the best time to start appropriate and effective treatment to stall the slide.

Research suggests that the earlier the onset of male pattern hair loss, the greater the severity of the condition. Research also suggests that the existence of a strong family history on the mother’s side is often weighed down by relatively poor treatment results. Also, as the name suggests, pattern baldness follows a distinct pattern.

Baldness in Men, in its early stages, affects the frontal area and the vertex (top, or crown) of the head. When it spreads over time, the occipital (back of the head) and the parietal areas (sides) remain, more or less, unaltered.

Why we lose hair?

Hair growth cycle in men, with pattern baldness, produces shorter and thinner hair with each advancing cycle. This happens under the influence of the hormone, dihydrotestosterone (DHT).

In simple terms, what this means is that each time a man’s hair falls out, new hair that comes up is thinner than the earlier strand - it also does not grow as long. It is lighter in colour as well.

In other words, male pattern baldness gets worse by a ‘shade’ every year. In the end, what is left is very thin, ‘peach-fuzz,’ or fair hair.

DHT and the Hair Connection

Hair loss is primarily a result of excess male hormone (testosterone). Put simply, testosterone + 5-alpha reductase, an enzyme = dihydrotestosterone (DHT), a major cause of hair loss in both men and women.

It is important to have proper nutrition to maintain and nourish hair. Because, when DHT penetrates the hair follicles, it tends to prevent proteins, vitamins and minerals from providing the required nourishment to sustain ‘life’ in the hair follicles. The result is either a shortened growth phase or extended resting stage of the hair follicle.

Research suggests that DHT may be implicated in 90 per cent cases of hair loss, because individuals who lose more hair – men or women – are more susceptible to the effects of DHT.

DHT reduces the growing phase and extends the resting phase of hair.

This, however, does not mean that you give up hope, without exploring possible treatment options.

The best thing one can do is to diagnose hair loss problems, if any, early, and initiate suitable treatment, without losing time. Once this is done, you may have a good chance to slow down the progress of your hair loss, or balding.

A trichologist can easily identify male pattern baldness and ‘stage it’ appropriately with a video microscope.

Video microscopy is a painless, non-invasive technique. It magnifies hair follicles and the scalp up to 200 times. It helps to detect hair thinning early - before it is visible to the naked eye! Besides, it provides a microscopic view of the scalp and determines the status of your hair follicles. It can also help to measure and compare hair density, or thickness, in different areas and over a period of time. In the process, it can help to monitor and record the progression of treatment.

A susceptibility to hair loss can also be predicted with video microscopy - in other words, the technique can help analyse and foretell possible hair loss years before it actually occurs.

What does this imply? The earlier your hair loss is diagnosed, the better your success rate with suitable treatment.

The basic aim of treatment is to slow down, control, or ‘arrest’ the progression of hair loss and try to facilitate hair growth.

Medical treatment works favourably in the early stages of hair loss - especially to slow down the progress of hair loss. Treatment may not, however, be the only solution. Undergoing hair transplantation could also be needed.

Click on to read in detail about treatments available for male pattern baldness.

A Case In Point

Vipul, a business executive, came to our clinic with hair loss. He said he’d lost almost 40 per cent of his scalp hair during the last three years.

His scalp showed balding areas on the crown. He said there was a strong family history on either parental side. His close relatives, especially his maternal uncle, had a clear predisposition for baldness before they had turned 35.

Vipul said there was no room for leisure, because of his high pressure, stressful job. He said he has spent but little quality time with his family. He also reported that he often took refuge in smoking and alcohol to overcome his stress.

Worse still, he added, that his receding hairline was giving him a complex. He feared that this could affect his performance at work and also his annual appraisal.

We prescribed him an appropriate homeopathic remedy and asked him to reduce and give up smoking and alcohol over time. After one year of treatment, we saw a healthy change in his hair loss condition. Scalp psoriasis treatment: All you wanted to know
Posted By: Dr Batra's™,