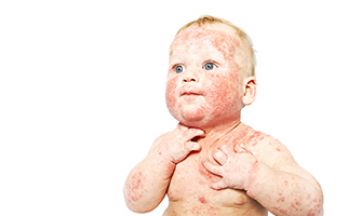 1 year old Sakina was suffering from itchy eruptions all over her body that exuded blood and sticky watery fluid. Her dress was stained with blood. Her parents said that Sakina suffered from this dreaded ailment since birth. They had tried the best conventional treatments but all in vain. No amount of steroid creams and emollients provided any relief. Sakina was then brought by her parents to a homoeopathic doctor and was diagnosed as suffering from atopic dermatitis and after detailed case analysis given by her mother. The case analysis also included the mother’s emotional condition during pregnancy which revealed that the mother was highly stressed and had suppressed anger. Sakina was prescribed homoeopathic medicines.  Slowly and steadily Sakina’s condition had improved. By 6 months all the eruptions had gone, itchiness had gone completely and the discharges stopped in the first month only. The mother was happy as in the very 1st month only the child had peaceful sleep which otherwise was a tough because of her ailment.

Eczema is a medical condition in which patches of skin become rough and inflamed with blisters which cause itching and bleeding.

Atopic Dermatitis: Atopic dermatitis is a chronic, itchy skin condition that is very common in children but may occur at any age. It is also known as eczema and atopic eczema, and was formerly known as Besnier’s prurigo. It is the most common form of dermatitis. Atopic dermatitis arises because of a complex interaction of genetic and environmental factors. These include defects in skin barrier function making the skin more susceptible to irritation by soap and other contact irritants, the weather, temperature and non-specific triggers.

Conventional modes of treatments are based on immunosuppressant. They may clear the skin in a few days to few weeks but it would recur as soon as the effect of the medicine wears off.

Topical treatments like creams/ ointments reduce the itching and inflammation temporarily but it would return with more intensity. Homoeopathy helps to stimulate body's natural healing capacity and restores the deviated immunity back to normalcy.

Artificial Ultra-violet light therapies are known to cause burns but Homoeopathy has no such side-effects.

Homoeopathy is non-addictive and can also eliminate the need to consume conventional medicine.

If Homoeopathy is considered as treatment option in the early stage of the disease, then the overall control of the disease in future is much better.

Homoeopathic medicine helps to deal with stress more effectively and helps control the intensity of complaints during seasonal variations.

Homoeopathy uses natural medicines in potentised form which is extremely effective and absolutely free from any side effects.

In any skin affection there is often an underlying psychosomatic factor. Homoeopathy can help treat this factor very effectively without causing dependence or addiction.

There are numerous things that people with eczema can do to support skin health and alleviate symptoms, such as:

Applying moisturizer within 3 minutes of bathing to "lock in" moisture.

Moisturize your skin every day.

Using mild soap or a non-soap cleanser when washing. Air drying or gently patting skin dry with a towel, rather than rubbing skin dry after bathing.

Avoiding rapid changes of temperature and activities that make you sweat (where possible).