All about Scalp Psoriasis

When psoriasis affects the scalp skin it is termed as Scalp Psoriasis. Raised scaly patches and flaky skin that looks a bit like dandruff appear on the head or white flakes on your clothes could be seen which are very similar to dandruff. Unlike dandruff they are covered with thick silvery white scales and there is severe itching. There could be hairloss is severe cases.

The exact cause of scalp psoriasis is unknown but the following factors could aggravate the condition:

Conventional modes of treatments are based on immunosuppressant. They may clear the skin in a few days to few weeks but it would recur as soon as the effect of the medicine wears off.

Topical treatments like creams/ ointments reduce the itching and inflammation temporarily but it would return with more intensity. Homoeopathy helps to stimulate body's natural healing capacity and restores the deviated immunity back to normalcy.

Artificial Ultra-violet light therapies are known to cause burns but Homoeopathy has no such side-effects.

Steroids may be prescribed in some cases to decrease itching and inflammation but they slow down the immune system and the frequency of their consumption keeps increasing. Homoeopathy is non-addictive. Homoeopathic medicines treat Psoriasis gently without damaging the vital organs unlike conventional medicine which is known to damage the Liver.

If Homoeopathy is considered as treatment option in the early stage of the disease, then the overall control of the disease in future is much better.

Homoeopathic medicine helps to deal with stress more effectively and helps control the intensity of complaints during seasonal variations.

Unlike crude medicine which contain high amount of Lead; Arsenic or Mercury which are known to damage the vital organs, Homoeopathy uses natural medicines in potentised form which is extremely effective and absolutely free from any side effects.

Coconut oil is of particular importance in psoriasis of the scalp. A light scalp massage at bedtime helps to loosen the scales of psoriasis. The next morning gently wash off the oil with a mild, natural shampoo. The scales will come off, leaving you feeling a whole lot lighter. They will also help reduce itching of the scalp. Cutting hair short helps to manage flaking and hairfall more effectively but it may not be pleasant for everyone. Don’t use fine combs as they can trigger flaking of scalp. Include flaxseeds in your daily diet as they reduce flaking. Avoid red meat and sea foods as they increase flaking and inflammation. Yoga and meditation help reduce stress which in turn helps the skin to heal faster. Can eczema pass on to another person?
Posted By: , 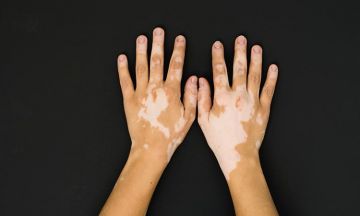 Causes and treatment options of vitiligo
Posted By: Dr Batra's™,