How Obesity related health problems can be prevented?

Obesity affects you adversely both mentally and physically. It has a negative impact on the confidence, productivity, and self-esteem of an individual, as well as their overall health.

Obesity is, quite literally, a growing problem. A London-based institute recently reported that more than a third of all adults around the world were obese, or overweight. What is more alarming is the fact that between 1980 and 2008, the number of people affected with obesity in the developing world rose from 250 million to 904 million while in the developed world, the figure increased from 321 million to 557 million. This shows that developing nations are at a higher risk of being affected with obesity. According to recent estimates, we Indians have a higher body fat percentage and a greater incidence of abdominal obesity than westerners.
With 55 million obese people, and 45 million diabetics, India has become a global hub for diabetes and obesity. Therefore, obesity should be treated like a disease, and not just a lifestyle problem, as it is a contributory factor  to several associated ailments, many of which can be life- threatening.

•    Heart: Your chances of having high blood pressure are greater if you are overweight or obese. Being overweight increases your risk for coronary heart disease (CHD). It causes a condition in which a substance called plaque builds up inside the coronary arteries that supply oxygen- rich blood to your heart. Plaque can narrow or block the coronary arteries and reduce blood flow to the heart. This causes chest pain and heart attack. Obesity can also lead to stroke and heart failure as blood clots, which result from plaque formation within the arteries, can block the flow of blood and oxygen to your brain.

•    Type-2 diabetes: In type-2 diabetes, the body’s cells do not use insulin appropriately. Initially, the body reacts by making more insulin. However, over time the body cannot make enough insulin to control its blood sugar level. This leads to diabetes and other related health issues. It has been observed that most people who have type-2-diabetes are overweight.

•    Cancer: Being overweight or obese raises your risk of colon, breast, endometrial and gall bladder cancer.

•    Osteoarthritis: Osteoarthritis (OA) is a common joint problem of the knees, hips, and lower back. The condition occurs if the tissue that protects the joints wears away. Extra weight can put more pressure and wear on joints, causing OA pain.

•    Sleep apnea: Sleep apnea is a common disorder in which you have one or more pauses in breathing or shallow breaths while you sleep. A person who has sleep apnea may have more fat stored around the neck. This can narrow the airway, making it hard to breathe.

•    Gallstones: Gallstones are hard pieces of stone-like material that form in the gall bladder. They are mostly made of cholesterol. Gallstones can cause stomach or back pain. People who are overweight or obese are at increased risk for gallstones. Also, being overweight may result in an enlarged and poorly functioning gall bladder.

Obesity carries with it a multitude of health risks, but a recent study shows that obese adults who were obese as child have a much greater risk of developing health problems including abnormal kidney function, asthma and difficulty in walking.

The causes of obesity among children are complex and include genetic, biological, behavioural and cultural factors. If one parent is obese, there is a 50 per cent chance that their children will also be obese. However, when both parents are obese, their children have an 80 per cent chance of being obese. Although certain medical disorders can cause obesity, less than one per cent of all obesity is caused by physical problems. Obesity in childhood and adolescence can be related to:
•    Poor eating habits
•    Overeating or binging
•    Lack of exercise
•    Family history of obesity
•    Medical illnesses (endocrine, neurological problems)
•    Medications (steroids, some psychiatric medications)
•    Stressful life events or changes (separation, divorce, death, abuse)
•    Family and peer problems
•    Low self-esteem
•    Depression or other emotional problems.

Obesity in children is difficult to tackle as you need to be extremely careful about the way you communicate with your child regarding his/her weight problems. Parents are afraid that if they mention healthy eating or being active, their child might translate it into “They think I am fat.” This might lead to retaliation instead of improvement in their health. However, when you notice that your child might be at an unhealthy weight, understand that you need to have a serious talk.

Look for opportunities to talk about your child’s health, but do it in small doses, not one big serious discussion.  It is important to have a good open dialogue with your child about the importance of activity and healthy eating.

Talk to them when you are making dinner, packing school lunches, or ordering at restaurants. You can talk about healthy choices of food for the entire family, not just ‘them.’ This will make them feel that everyone in the family needs to have healthy food for better life.

Encourage children to play outdoor games. Tell them that sports are important to develop not only a healthy physique but also to instill team spirit and leadership. You can occasionally play badminton, cricket etc with them. This can be a fun activity and bonding time for the entire family.

Obesity can be prevented by implementing a few simple rules in your daily regimen —
•    Drink a lot of water during the day and drink a glass 20 minutes before and after meals
•    Encourage outdoor sports instead of computer games for kids
•    Set aside at least 30 minutes every day for exercise. You don’t need fancy exercise equipment or an expensive gym membership for this purpose. Walking, jogging, running, cycling and swimming are great for weight loss. You can also join a dance class or learn martial arts
•    Eat healthy. Include fruits, green vegetables, cereals and whole grain foods in your daily diet. Avoid sweets, fried, junk, packaged and refined foods. Eat small meals and chew your food slowly. Avoid eating desserts at parties or use low calorie substitutes
•    Eat a heavy breakfast, light meal and early dinner
•    Avoid using conveniences like remote control devices, escalators and elevators
•    Become a non-smoker. It’s a myth that smoking induces weight loss. Nicotine suppresses appetite but its side-effects are enormous
•    Avoid drinking. Most forms of alcohol contain a high percentage of fat. The fat content shoots up, thanks to sweetened aerated drinks and the greasy, fried foods that are usually served with alcohol.

Obesity needs to be treated as a disease, and not as a lifestyle disorder. It can be treated through diet regulation or modification, and incorporation of regular physical activity into your routine. Lifestyle changes are infinitely preferable to anti-obesity medications like appetite suppressants or medications which may minimize fat absorption from the intestine, and have major side-effects, some of them serious. Does every child outgrow the allergies while growing up?
Posted By: Dr Batra’s™ , 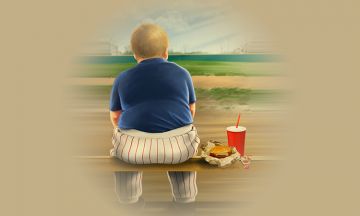 Know why your child is obese?
Posted By: ,