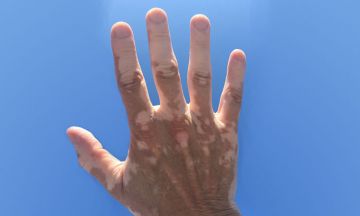 5 things to know about vitiligo disease

When Abhijeet decided to marry Sarika, little did he know that his mother, who always acknowledged his choices and supported him willingly, would object his relationship with the girl he loved so dearly. This lovely couple had to finally end their relationship. The reason? Vitiligo. Sarika’s mother suffered from this ‘white’ disease called vitiligo and there was a possibility of it affecting Sarika or her offspring too. Abhijeet’s mother did not want vitiligo disease to enter in her family through Sarika.

Vitiligo, also known as leucoderma (leuco = white; derma = skin), is a common skin condition where the skin loses its pigment called melanin that determines its colour. Characterised by irregular, pale or milky white patches, Vitiligo not only impacts the physical health of the patient but also negatively affects his emotional and psychological well being. It causes social stigma, can lead to end of relationships, as seen in the above case and also become the reason for divorce.

Unfortunately, adding to this trauma is the fact that people have several misconceptions about Vitiligo like it is contagious or a result of a punishment for wrong doing. These myths add fuel to the pain and suffering of the patients suffering from Vitiligo.

Also read How to identify Vitiligo

Through this article, we try to cover 5 important things about vitiligo disease to help you understand it better and take an appropriate treatment. Also, if you are suffering from vitiligo, please take this vitilogo evaluation test.

Vitiligo is not contagious, which means it cannot be passed from one person to another. It cannot be transmitted via touch, saliva, blood, inhalation, sexual intercourse or by sharing of personal items like water bottle, bath towels, swimming pool, etc. Some people also believe that they can get Vitiligo by patting dogs with white spots on their head! These are all baseless myths.

One of the most popular superstitions about vitiligo disease is that it is a punishment for your wrong doing, or a result of your past karma. In fact, leucoderma occurs as a result of loss of melanin, the pigment that determines your skin colour. The area of your skin where melanin is not produced becomes white in colour. The reason behind the destruction of these pigment-forming cells is not yet completely understood. However, a combination of auto-immune, genetic and environmental factors have been seen as the causes of vitiligo. If you have the family history of vitiligo, you can take Dr Batra’s Genohomeopathy test to know the risk of you or your children suffering from it in future.

Some people believe that vitiligo is aggravated by consuming milk or other white food products. Some also believe that eating sour foods such citrus fruits (lemons, limes and oranges) can increase the spread of vitiligo. There is also a myth that says drinking milk shortly after eating fish causes and aggravates the disease. However, none of it is true. Vitiligo is an auto-immune disorder, which has no relation to the food you eat. Therefore, eating or avoiding certain foods will have no impact on the progression of the condition.  Know more on causes of vitiligo.

Many people, due to lack of knowledge about Vitiligo disease, believe that people with white patches are not intelligent or that they are unhealthy. This is a myth. Vitiligo is not associated with the degree of one’s intelligence. It does not influence the brain or any other part of the body. The effects of this disorder are restricted exclusively to the skin.

Skin cancer and leprosy are two different disorders with no relation with vitiligo. Also, there is another condition, which is believed to be similar to vitiligo, called albinism. In this condition, people are born with little or no melanin. It is different from vitiligo because in vitiligo, the onset occurs when melanocytes are damaged. Also, vitiligo rarely affects the entire body like albinism.

Skin cancer, on the other hand is a result of mutations in DNA and Leprosy is an infectious disease caused by Mycobacterium leprae. If left untreated, leprosy can cause skin abscesses and nerve damage. Vitiligo is not detrimental beyond the change in skin colour. As discussed before, it does not cause any physical impairment.